Here are some of the great clearance deals found at Target. There really are great deals in every department. Most of the items are only at 30% off, but by the middle and end of the month we will be seeing lots of 70% off. Wahoo!

These deals were found at the Federal Way, WA Target. Keep in mind clearance deals will vary by location, but all Target’s do lots of clearing out in January, so you are bound to find some great deals. 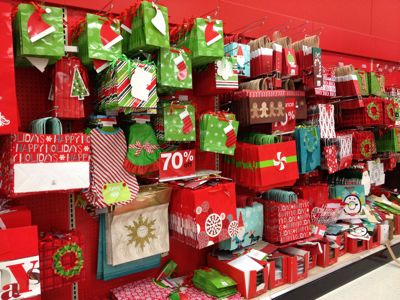 This phot was taken at Issaquah 3 days ago, it was not from Federal Way today. I forgot to take a photo while I was there, and it was pretty wiped out.

Most stores still have their Christmas clearance at 70% off as of today (1/3/13). I did hear from Monica who said her Shreveport, Louisiana Target went 90% off today. Which leads me to believe that 90% off should happen tomorrow 1/4 or Saturday, 1/5. If you see 90% off at your store please let us know by commenting on the All Things Target Facebook page.

Also, some stores are quite picked over at 70% off, so hopefully you will find a store that has a nice selection. If you pick anything up at 90% off, I would love to see you photos. 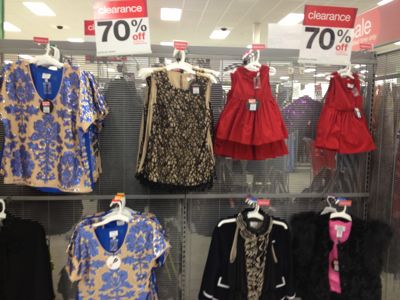 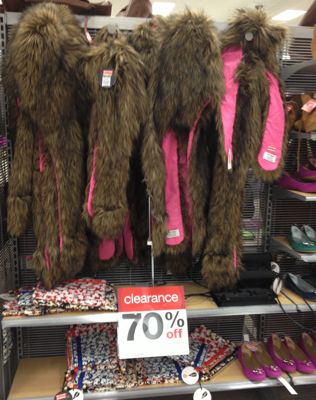 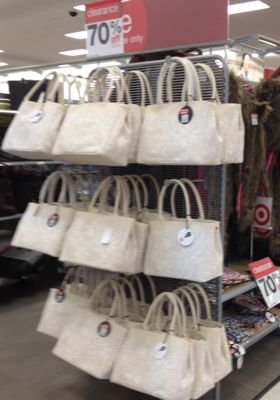 There still seems to be quite a bit of Neiman-Marcus stuff left at 70% off. I am thinking this collection wasn’t such a big hit.   The collection is now also 70% off online too, so if you want something, but don’t want to run to the store, it is a great option.   These items cannot be returned after 1/5/13, so I am thinking they may pull them items at the end of the day on January 5th.   I am not 100% certain, but it seems possible. 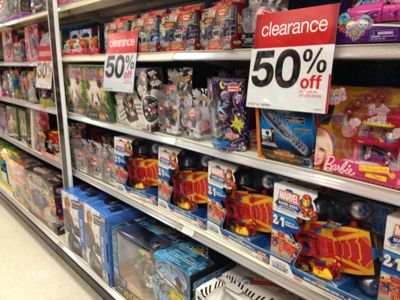 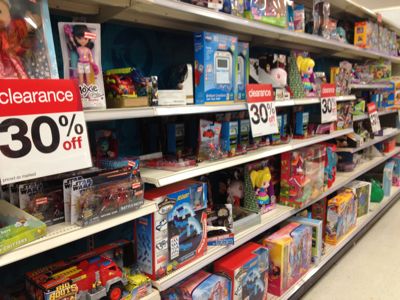 It seems like a lot of stores are starting to condense all clearance toys onto an aisle. Most of these toys were marked down to 50% off, even though one of the signs says 30% off. I did not really find anything at 70% off today. I am thinking the BIG 70% off markdown should take place next week. I will keep you updated!! 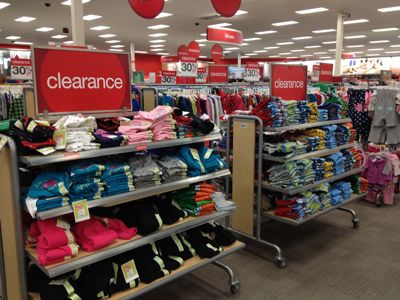 There is a TON of clearance clothing in the baby departments, most of these items are 30-50% off, but keep an eye on this department I am sure we will see some 70% off clothing in 2 weeks or towards the end of the month. 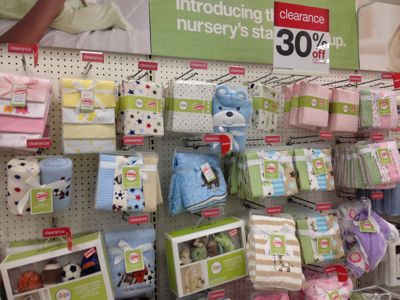 Lots of Circo baby blankets, sheets and mobiles on clearance. 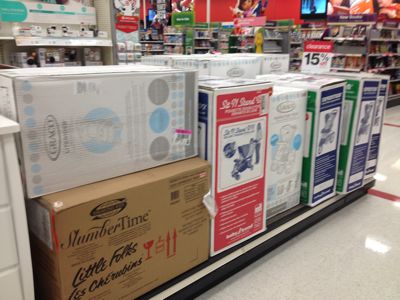 I have mentioned before that January is a great time for baby equipment to go on clearance. Most of the items are currently 15-30% off. I plan on posting a bigger baby clearance post, so you can get an idea of all the great finds there are. 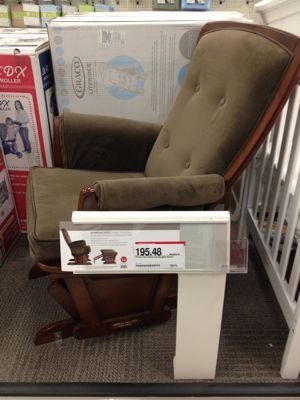 They even have baby furniture on clearance including glider rocker, crib, changing tables, dressers and more. 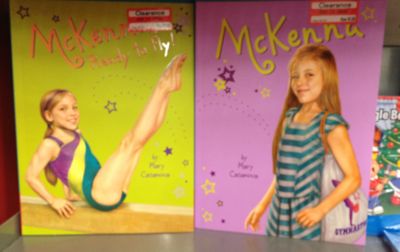 Every year Target clearances the American Girl books with last year’s “Girl of the Year”. I usually wait until they go 70% off and then pick them up for my daughter’s Easter basket. These were only 30% off. You can usually find the clearance books mixed in with the electronics clearance. 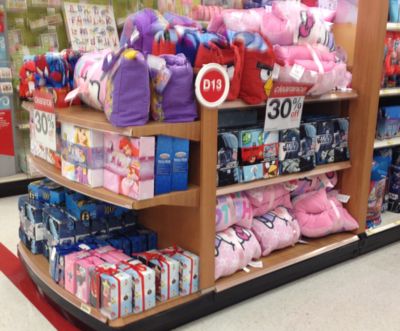 Lots of kids character bedding has been marked down to 30% off. 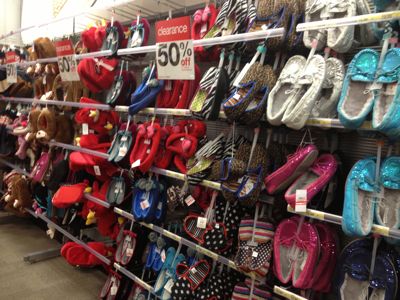 I found a big wall of slipper marked down to 50% off. 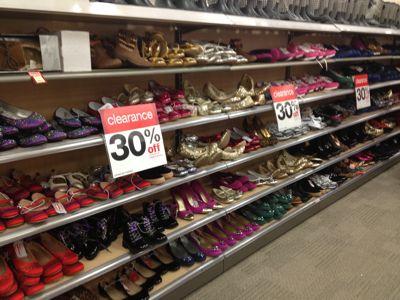 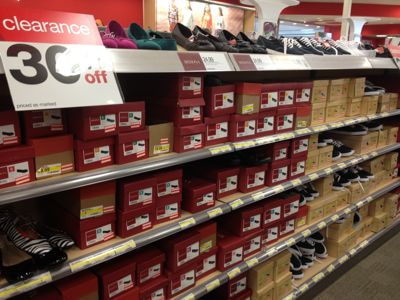 I mentioned that we usually see a ton of shoes go on clearance in January and sure enough we are starting to see aisles full of clearance deals. Most of these are 30% off right now, but they will go 70% off sometime this month. 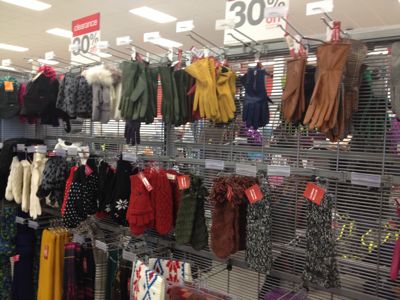 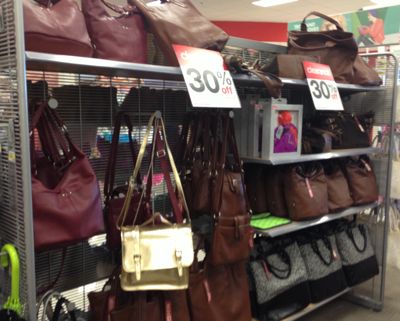 You should be able to find lots of women’s accessories (purses, hats, gloves) on clearance at 30% off. They are clearing out the darker colors to bring in new stuff for spring. 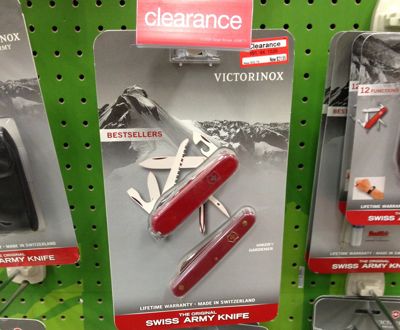 There are some markdowns in the sporting goods department. I like to pick up some of the Swiss Army Knives because they make great guy gifts. These vary rarely get to 70% off, they usually only have a few left when they get marked down to 50% off, so keep that in mind. 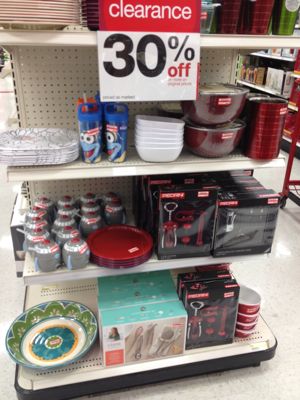 I found an endcap in the kitchen housewares filled with items marked down to 30% off.

All of the clothing departments have racks and rack full of clearance deals.

I love Target in January! Can’t wait until all this stuff hits 70% off and the Christmas stuff goes 90% off.